A big thanks to Vern Schleyer ~CMWC 2012 Chicago organizer~ for giving us his take on the awesome happenings in Minneapolis during the NACCC’s this year!

8/28/14- Made it across NE Minneapolis in like nine minutes and found Gabe and Six at Holmes Park. Finally put a name to a face with Altan Gurel. We rode out. And rode and rode. It was a fun ride on a cloudy windless day but I was hurting, hung over and thirsty as fuck.

It was the first all wood track I had ever saw, and it was gorgeous. I met none of the requirements to race, including cardiovascular fitness, so after a very weak gyro and a trip to Office Depot I made my way to the stands. Leah, Stu and Matt were already there, among fifteen or twenty other people. and we yelled foul jokes about and to Erica while seated next to her parents. The racing was beautiful but cut short by the weather. I caught a ride back to the city with Sarah and Jennie and Gabe. Parts of the trip did not consist of wrong turns. I would have gotten naked but that bitch made me throw out my wizard staff- Ralph Stout, 8/31/14. I ran into Kayla on the way to register. She seemed remarkably well rested and sane for an organizer. Every part of this event was well executed. Finally found Joel and Augie in the parking lot of Peace coffee, and ate a kick ass BBQ meal. Joel and Augie and Sam and I rode to start the poker run, but we are old, and funny looking, and lazy. We ended up drinking beer on some huge suspension bridge near the greenway instead. It was a fine night. Zalen and Wallace and Brunnelle and a bunch of others drifted by, and resulted in as fine a buzz as I’ve had in the Twins.

8/29/14– I tried to sleep in but the city was cutting down a massive tree outside of the house and it was more than a bit distracting. Rode to a diner in the rain. Extraordinarily wet. Went to Weismann Museum of Art, on the University of Minnesota campus. It was pretty good, but was featuring a student curated exhibit, which wasn’t great, because kids are dumb. Left there and crossed the slowly-getting-mighty Mississippi, and went to the Minneapolis Museum of Art. It was fucking outrageous. Similar in approach to the Met in Mew York, I was greatly disappointed that I didn’t have more time to explore it. Rolled over to Alley Cat Cycles, they threw a great party out back in the alley. Ate more, drank more, got rained on more. Spent time with Lucas and Bega, which is an awful lot like getting to meet Waldorf and Statler in person. We were stuck under tents and eaves for quite a while as the rain was no fucking joke, though the Industry Forum seemed like a success. Rode out to a lake with Sticks, one of the organizers focus’ was to make swimming available every single day. It was a fine idea.
8/30/14 – Qualifier – Went to course and it’s gorgeous. Flat. Limited gravel. Closed. Nice. Racers were set loose in groups of five, every five minutes. Unofficial total is around 200 paid riders. Free coffee at the course for those up early enough. It was a very good thing. Day passed slowly. I had most of my shit spread out of the blacktop to dry, eager to ride but not in a rush to race. I finally got moving, and rode the qualifier around maybe two p.m. Felt great, flew around the course, hit thirteen tags, mostly of decent value, and was thrilled with the course and the race overall. Remarkably fun. Possibly the greatest development in racing history came with the advent of the Blazer buck, which were ground scores with Jakes face that actually counted towards your final score. I got one, after someone pointed it out, but I figured I’d rather have the keepsake than qualify, so it’s still on my desk at this very moment.  It’s hard to imagine what’s lonelier- Ralph’s intervention, or his funeral – Vern, 8/31/14. After the race ended Raul and Brian from Chicago finally showed up, and it was good to see their sloppy asses. I tried to roll out to the beach again but followed Chas and Cris instead, until they got mad that a fairly good sized group of us were incorrectly following them to a drug store or something, then drifted back to NE and went to Luce with Kenny and Will from Chicago, ran into Anna and Robert and the pizza was really good. Next up was the alley party behind One on One Bicycle, where organizers had recreated Mad Max Beyond Thunderdome, It was fun to watch Amanda and Cooper knock the living shit out of each other for a few hours, You would think they hadn’t invented violence in New York yet. The free beer and tacos were fantastic too. Dan and Dave from Chicago asked me for life advice, which is a little like trying to take a sip from a fire hydrant. I doubt they will do this again. 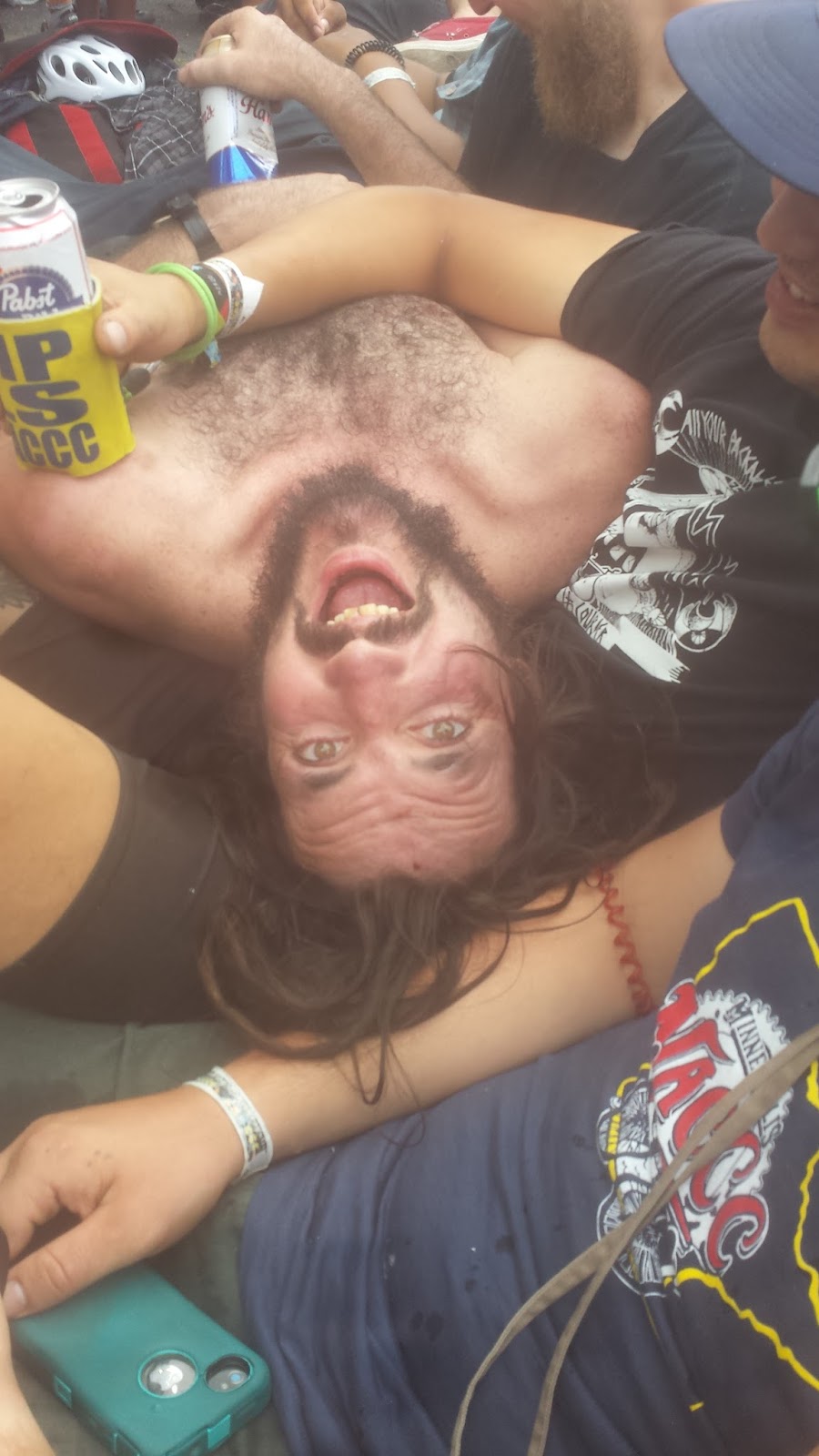 8/31/14- Main Race – I felt so great in the qualifier that its difficult to believe that I came in 123rd out of 160 or something, so i assume the race must have been rigged, probably. Main race looked awesome. I showed up later in the day, just rolling around town enjoying the upper upper midwest for a minute before I fell back into the insanity. Race ended, took group pic, got to see Lane yell at everyone because he lost his manifest. May not win most politest courier this year, but what do i know. Open forum was super fun, NYC made a really strong bid, and ultimately surprised the shit out of a lot of people by getting the bid, thereby ruining the long standing tradition of denying New York the bid. Bega and I finished last remaining moments of daylight shooting the shit in a pair of pink lawn chairs, and I’m just sentimental enough to admit it was a peak moment for me, I went to meet an old friend for dinner, and the rain became so fierce that I was stuck at her place and missed the closing ceremony. Austin took first overall, and Teeners snapped up first place woman. 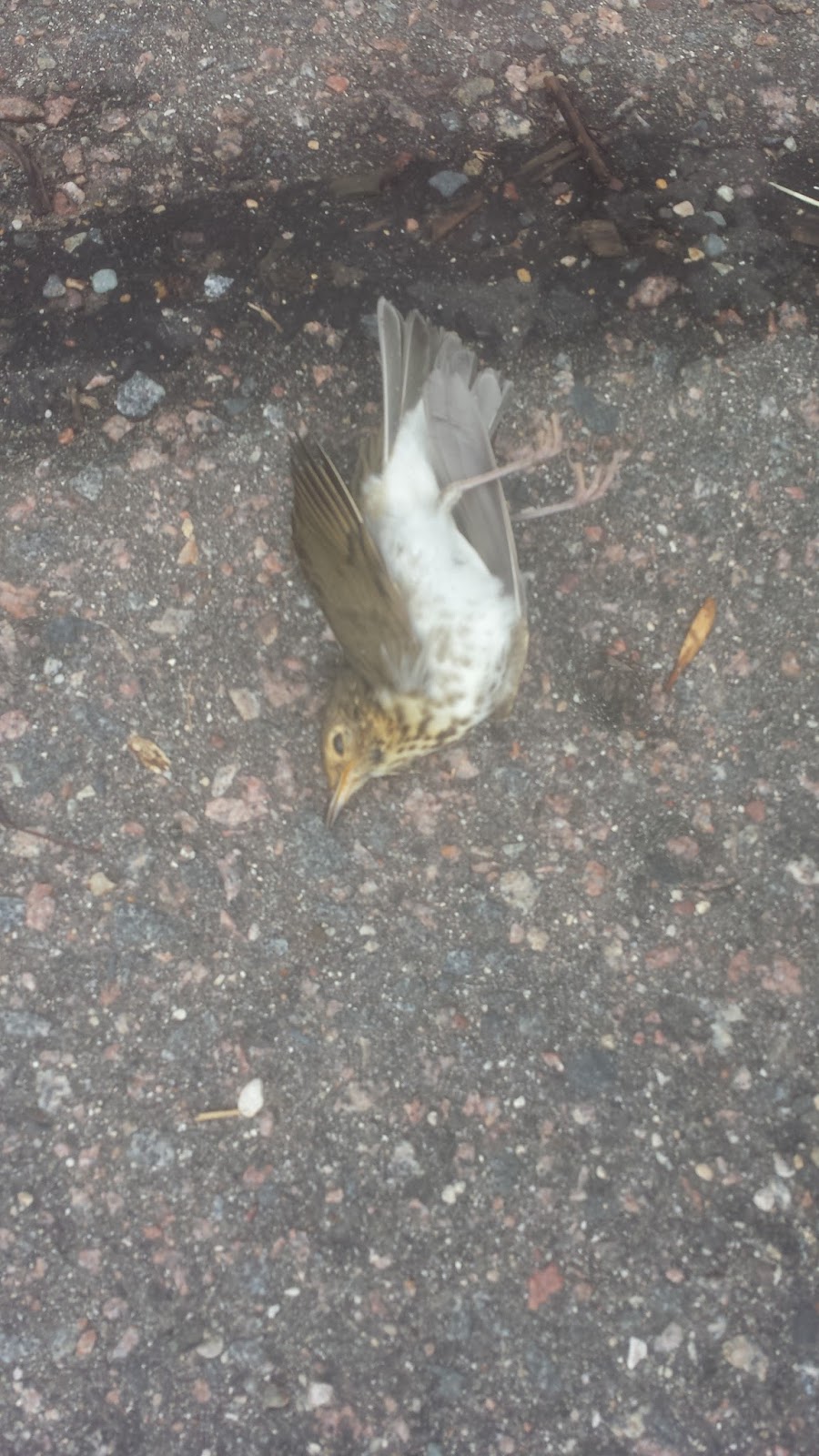 9/1/14 – There was a dead bird in the alley as I left Ginnys this morning, so I texted a picture to Joel as birds make him uncomfortable. And I wished him a nice flight. I was running tight on time but risked a stop at Taco Bell for breakfast, and it was worth it as I made it just in time for the 9 AM bus that left around ten. The parking lot was nuts. Shotgunned beers, bagged wine, and mimosas. No sign of Corey yet, his bus was to arrive from NYC at 6:30 this very same morning. 122 tubers divided between two very crowded buses. People hanging from windows, eating aerosol cheese. Departed. Rode lots of little roads with lots of odd turns all the way to the Cannon River. Well, it’s all over for me, I just puked up blood and a whole pickle. – Ralph Stout, 8/31/14. The Saskatchewan Screamer was there, cheerful as ever but not looking thrilled. He said the water on a good day isn’t very warm, and today is not among the good days. We got there and he was right. The water was like runny ice. It was awful. Lucky as shit, once we got out of the tributary the main section of the river was much much better. Nearly perfect, really.

Drifting and drinking all day is not a bad way to live, and everyone was pretty goddamn thrilled to float in the sun. 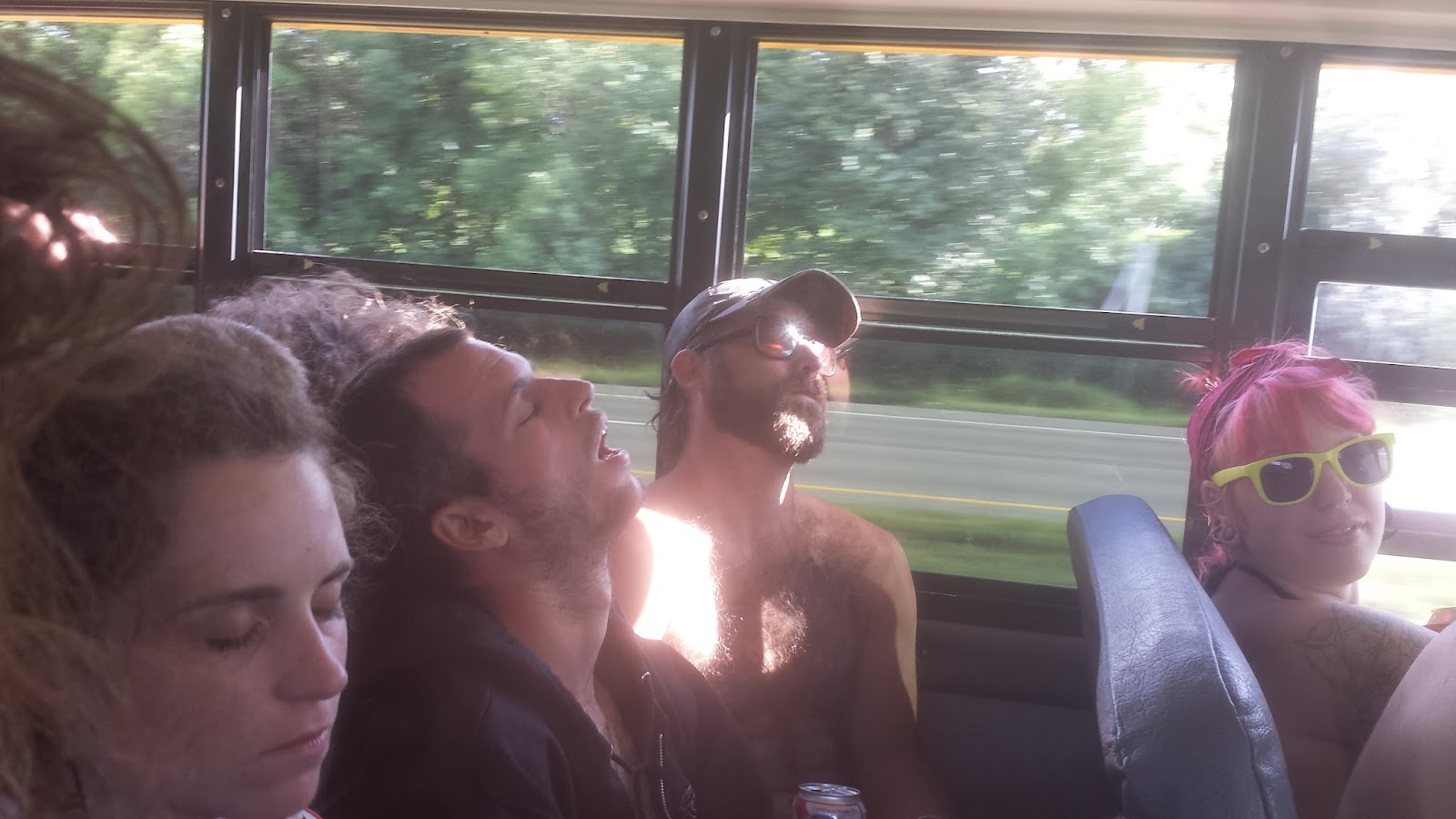 9/2/14– Said goodbye to the 20 or 30 people staying at Drews. There’s Corey, asleep on the hardwood. Ouch. Departed, Bostwick in shotgun, running a couple bikes back to Chicago as favors. Somehow lucky enough to make it a really short trip, despite having to go past O’hare at rush hour. It felt weird to be alone, but then Ralph showed up by my house an hour or so later, then alone seemed like a pretty good alternative. 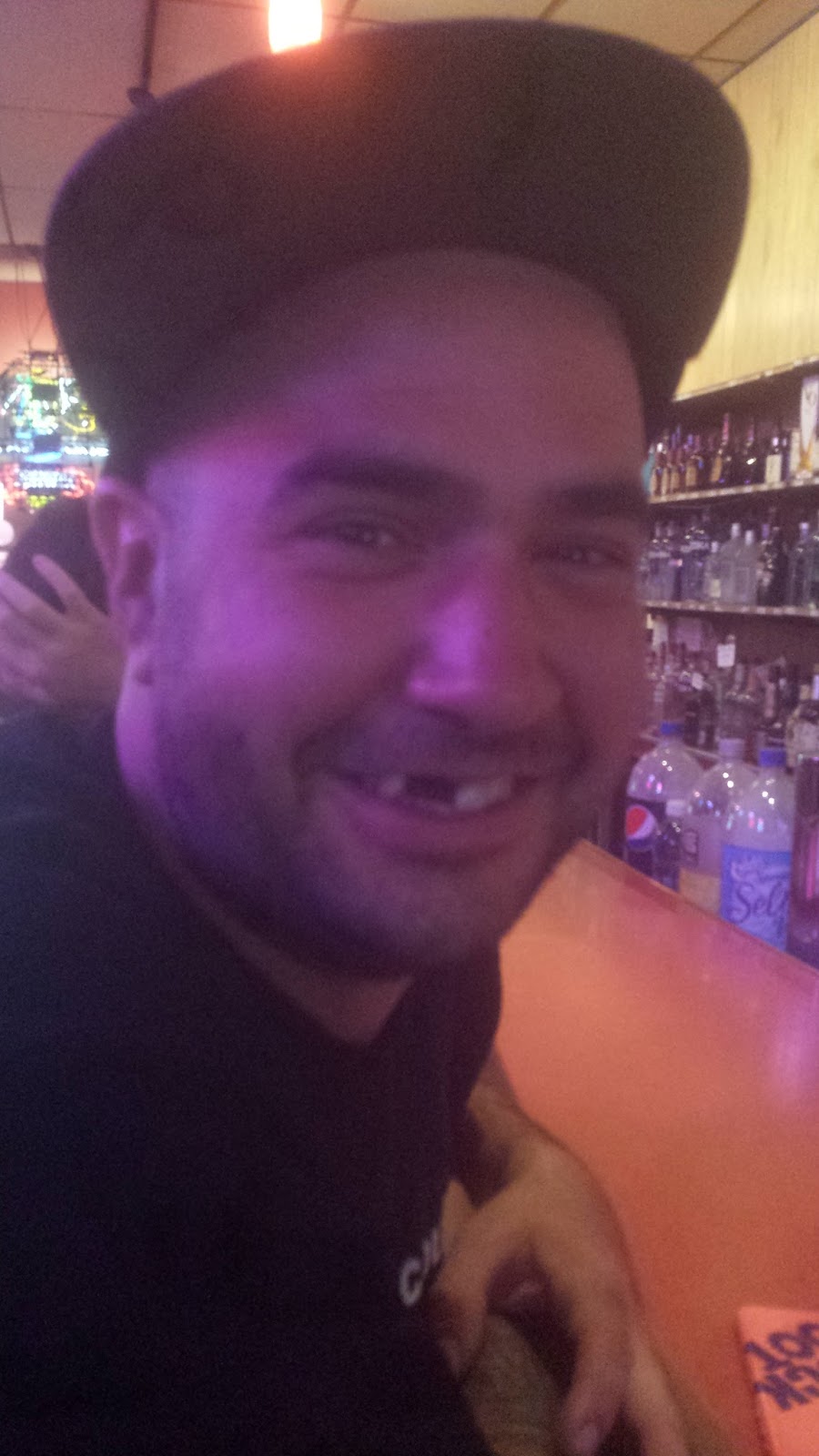 A million thanks to the organizers, and all the locals and volunteers- Minneapolis was fantastic and the whole week was perfectly executed.