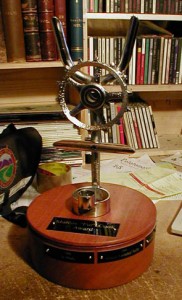 the following people have contributed their skills to the creation of the MCA trophy: Simon “Horse” Firth, Bilenkey Cycles, Philadelphia – found the bits around the shop to make the trophy to begin with, did the welding and had it chromed. Jonathan Schechtman, Meeting House Furniture Restoration, Vermont – Turned and stained the mahogany (sustainably harvested!) base. Jason Cohn, EGO Services, SF – engraved the first 4 name plates for the base. Mike Ritchey, Lo-Fi Customs, SF – welded the base plate on so that the trophy could be mounted to the base.